Senor Oscar of the Grouchiness

I know I should have more socially conscious and/or intellectual things to discuss today, but I positively cannot resist posting the faves and freak shows from what I thought was an otherwise very boring Oscar ceremony. Except for that joke Jon Stewart made about how now that Oscar is 80 yrs old, that makes him the automatic republican party nominee. Hah! In case you didn't get that, John McCain, he means you are OLD.
Frankly though, there really weren't that many super exciting outfits to discuss either. BAH. Doesn't anyone want to make a statement anymore, a la Bjork? Alas.
FAVES
(of course) HELEN MIRREN
Who always looks smashing. If I am half that hot when I'm 60 odd years...heck, if I'm half that hot NOW I'd be happy. For you doubters out there - you try pulling off red satin and see what you have to say. 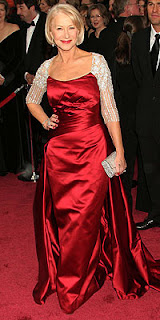 (adorable French girl that won Best Actress). I looked at this for a very long time before I decided I LOVE it. Argue if you must, but I love this mermaid fish quilted craziness, and good heavens can she pull it off. 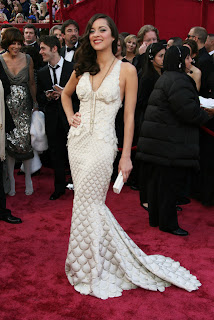 What a fab color on her. No pregnant girl should look this adorable. I think I must hate her. 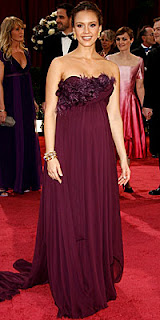 Jennifer Hudson - when she was presenting I couldn't stop thinking about how great she looked, and then...I saw this picture. Suffice it to say - not the most flattering I've seen. Jennifer, hasn't anyone told you never to have a picture taken straight on? ANGLE girl! Angle.

Imagine looking at those boobs with 3-D glasses on. Oy. 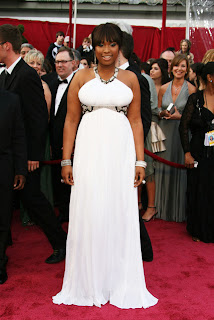 And the nominees are:

For seriously un-cute hair. And I could post at least 12 other photos of her in a tight strapless dress in a variety of colors. My favorite comment was her comparison to one of the Von Trapp sons. Priceless, and so apt. For excessive use of jewels. Good land woman! At some point, didn't you look at yourself and think "I look a trifle sparkly for any one person. 1399 carats is just one too many". Maybe she was in a competition? 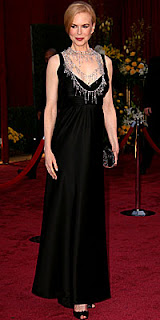 *** Disclaimer: NEVER let it be said that I don't adore and worship Heidi Klum. In my eyes, she can do no wrong. BUT, in the interest of being a fair and impartial judge, I have to put my personal feelings aside:

For a bun that is REALLY hoping for a spot in the Guiness Book of World Records. Cinnabon is jealous. On the other hand though, you have to give her credit for acknowledging that this sucker might have been a wee over the top. She was quoted as saying, "I have snacks stored up there". Oh how I love Heidi Klum. 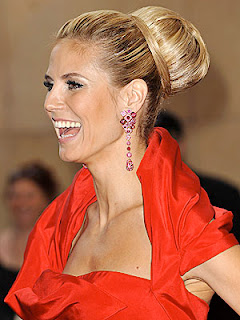 For being just plain scary. She looks like she is very cool and avant garde and doesn't care what anyone thinks which is her shtick and to hell with all you sheep! Whatever kind of statement she is trying to make (or making a statement by NOT making a statement), she proves the point that natural is not always better. Maybe it's cool to look like a very tall androgynous young man wearing what looks to be a black velour shroud minus an arm. I don't know. I'm pretty sure I dyed my hair that color once, and it was just as frightening. 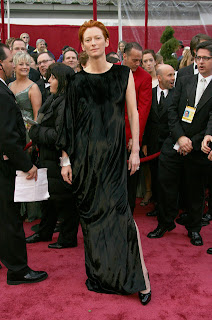 Does it make me shallow that I just spent 45 mins criticizing other people's clothes? Glass house, what?

It could be fleas. I remember my bulldog had fleas. He was grumpy for weeks. 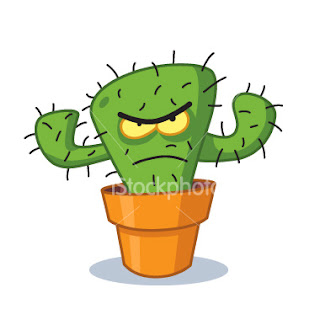 Grrrrrrr. I am prickly today. Just a warning.
Note to self: no more customer service phone calls today.

I think my political views are best expressed in the following video.

Look at these adorable little girls in their bathing glory. Notice how Addy is already sucking in -good girl. =) 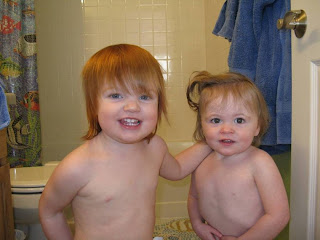 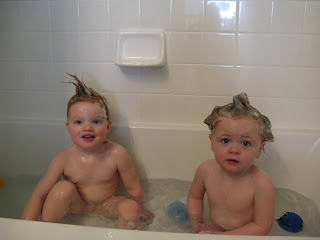 Our Valentine's get shipped by Priority Mail. 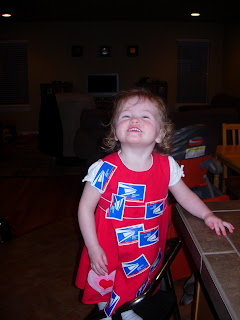