I wish I could even begin to describe the last month we have had. I have started to write this particular post at least 6 times and can never quite convey the proper amount of amazement and SHEER HORROR at how MANY things can go wrong in one person's life at one time!!!!! OH. MY. HEAVENS. You know when you say "it couldn't get any worse?" and people always tell you not to say that because things can always get worse? Well, I am now officially the living testament to that belief. It really is true...things can and likely will always get worse.


Note: I already told you about how Ammon got laid off...that was in May so it doesn't actually appear on the world's worst-month-ever events, but just keep that little bit of info in the back of your head when reading the June play-by-play below.

June 3 - Ammon's birthday and day of Actuarial Exam #2. Also known as: June 3 - the most anxiety filled day in a seriously long time. And no, we don't know his score yet (August).

June 9 - Speeding Ticket #1. I was on route to the airport and speeding madly (no surprise) because I had left late (no surprise there either) and wanted to be sure my friend didn't miss her flight. Bother.

June 11 - Dropped a contact down the drain. Keep in mind, these are hard contacts and not quuuuiiiiiiite as easily replaceable as soft. Thankfully, the contact was recovered after some serious sweaty effort on the part of Ammon, bless his heart, and a whole lot of water. And yes, I washed it at least 17 times before even considering sticking it back in my eye.

June 11 - Speeding Ticket #2. Due to the contact trauma earlier that morning, I got a late start (again, no surprise - do I ever leave or get anywhere on time?) to Pueblo, a 2.5 hour drive away, and the official Armpit of the Universe (with the exception of Moses Lake, WA). Because of speeding ticket #1, I set the cruise control for 90% of the trip, until about 30 mins away from Pueblo when I started speeding again because I realized I was late. Again. It took the female detective, not patrol officer, over 30 MINUTES to write me a ticket. Because I wasn't speeding or anything because I was LATE. Gads. Then she informed me that a) she never gives out tickets and lucky me I am the special exception and b) I was in a construction zone so my fine was doubled. Awesome. I think this must have been one of those new fangled "invisible construction zones" because there was not a cone or hint of orange within 50 miles.
Obviously I will be fighting this ticket, but there is a healthy chance that cops will knock on my door anytime now and take my license away before I get the chance. That, or my insurance will cancel me.

June 19 - The Passat has a premature and unexpected death. In Wyoming. Ammon decided last minute to drive to his niece's wedding in UT. He makes it to Rock Springs, WY (aka the 3rd Armpit of the Universe) where the car promptly decided it has taken enough abuse from the Crapo's, and died. We had a frantic 2 hours of ridiculous calls back and forth between Ammon and I trying to figure out what in blazes to do. Incredibly, our friend Miguel's dad lives not too far from there, and he rescued Ammon and not only towed the car to his house and let Ammon crash there, but then took him and the car all the way into SLC the next day. It is AMAZING to me what people are willing to do for you in a crisis. In anticipation of me driving to WY to pick up Ammon (bad idea), I had dropped Addy off at our wonderful friend's the Cox's who were immediately willing to let Addy stay over. Luckily, Miguel rescued us from our own idiocy before I got out of Frederick.

June 20 - We get THE ESTIMATE on the Passat. Are you ready? $8,000. I did NOT add an extra zero. Apparently the oil pump failed, the engine siezed, and that's that. We are now a one car family and the car is going to be buried in Salt Lake. Ammon flew home that night.

June 21 - Micaela floods the laundry room. Because a lost job, two tickets, and a dead car weren't enough, I thought I needed just one more trauma. I wish I could say that one of the machines failed, but sadly, it was all me. In one of my finer moments, I filled the laundry room sink to soak some clothes, and left the water running for a minute while I ran into the kitchen for something. Overcome by ADD and/or a wild fascination with dishes and what was on the Discovery Channel, I completely forgot about the water until roughly 30 minutes later when I heard the unmistakable sound of trickling water. I remember thinking to myself "if Ammon and Addy are both napping, then who is taking a shower? OH NO I DID NOT!!!!!!!!!!!!!!!!!!!!!!!!!!!" I actually said that in my head as I streaked into the laundry room to find water happily filling up the room and spilling down the air vent into the basement and the furnace below. Naive as ever, I thought we had managed to clean everything up with 29 towels and a wet vac, until as a precaution, we called the insurance company and had ServiceMaster come out.
Today is now June 26, and there are still 7 fans and 2 ginormous de-humidifiers going full blast 24/7. Since the decibel level is roughly that of a 757, we have more or less had to stop all verbal communication.
It turns out that we have to replace the floor and cabinets in the laundry room and the bathroom across the hall, as well as have the ENTIRE first floor wood refinished, which is 88% of the square footage. Apparently, we have to move out for an entire week while this happens. Living in a motel with a toddler and 2 dogs for a week should be super fun.

As ridiculous and horrid and bizarre this all sounds, I am actually doing quite well and keeping a pretty good sense of humor about the whole thing. I did have one giant long "WHY.....WHY????" sob session, but since then I feel quite philosophical about it all. Just think - now that we are down to one car, we have no car payment. And, if I really hated the bathroom floor, now I can redecorate for free! At one point, we did consider burning the house down to maximize the insurance benefit, but luckily good sense prevailed.
As a final note - the month is not quite over, so please pray that neither of us is struck by lightning, attacked by wild ants, or gets arrested for lighting Christmas Trees on fire in our backyard.

I've noticed something interesting about blogging....when I'm overly stressed and tired, I don't blog for obvious reasons, but I also don't read anyone else's blog because it makes me feel guilty that I'm not blogging, and who knows why else. But, I got over my little streak and starting catching up on my blog reading today and realized how much I had missed it! I feel totally disconnected from the world and even a little lonesome when I don't write and read blogs.
I love it when I read some personal insight that someone has come up with, or even just a bad-day-vent. It's makes that person somehow more real. My friend Marie B. is excellent at this. And I'm off to read more of all your fascinating lives.

You know you have a problem when...

...you find Nutella on your bra. 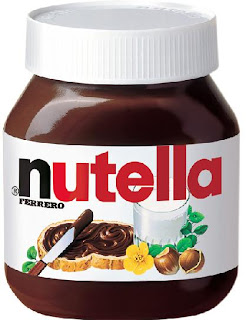 In large part, this thing is freakishly accurate.
What's Your Name's Hidden Meaning?