When a problem comes along, you must whip it.

80's Dance Party Sum-up:
For future reference, I know now to have our next 80's party well into February to avoid post holiday travel and excessive vomiting. I got a teensy bit freaked out right beforehand because so many people ended up having to cancel due to the sicklies, BUT...those that were still able to come made this party AWESOME. Thanks dudes (I can't say that without wanting to gag myself with a spoon)! And I must say, I outdid even myself on the decor. I think the framed photo of Princess Di & Chuck really added something special. I just love having a party with people that love being a retard for the evening as much as I do. Truly - there is something very liberating about throwing your dignity out the window and belting "Straight Up" as loud as you can. And wearing neon. Also supremely liberating.

Along with many hundreds of other great plans I had, I neglected to give out awards at our little fete, so here they are...

LEAD VOCALS: Mark V. (Risky Business) for his stunning sounds on, well basically every song, but specifically "Take On Me" by A-Ha. That high note is a doozy.

BUTT BARING DARING: Ashley Cox (Jane Fonda) for having more guts than a Thanksgiving turkey. Seriously - check out the slideshow.

FLASHDANCE: Rachel Anderson (pink sweatshirt and headband - always in mid-complicated dance move). I have never in my life seen a pregnant girl shake her money maker like this. I wish I'd had a bucket of water ready.

TOO COLD: This award goes out to Jared C. for not only the outstanding and totally useless ability to remember so many lyrics written (or maybe just sung, no...rapped, er...spoken) by Vanilla Ice, but for adding the appropriate moves and attitude to go with. Honorable mention to Spencer Anderson for equal willingness to humiliate oneself. Yo,

V.I.P. HUMILIATION NATION: Since both Mark and Ashley already have awards, this has to go to Anya Crace for sporting a pair of jeans that should never, under any circumstances, be forced on human eyes. My retinas are still burning. 2nd place for Most Hideous Pants goes to Andy Eldridge for those cotton hammer pants. Again...needles-in-eyes.

SHEER STAMINA: Meggan Hulme, who was still gyrating hours (ok not that long) after the first partiers bid us adieu.

MOST REALISTIC: If I didn't know better, I would swear that Teresa Morris still lived in the 80's because she just looked soooo....effortless. The hair! The bangs! The long sweater with kitties (or bears?)! The pegged pants! The hot pink belt! Absolute perfection.

TRIVIA NERD: Skylar. I cannot for the life of me figure out how or why one person could have such an inordinate amount of He-Man, Master of the Universe knowledge at such ready disposal.

BIGGEST NERD, BAR NONE: To Ammon, for actually googling solutions to the Rubik's Cube. During the party. While everyone else was doing karaoke.

I've run out of ideas for other awards, but the rest of you should know how much I appreciated and admired your work as well. Truly, YOU are what made this night a success. Before the party, I forced everyone into giving me pictures of themselves in those lost Wonder Years, which I made into our Wall of Shame. 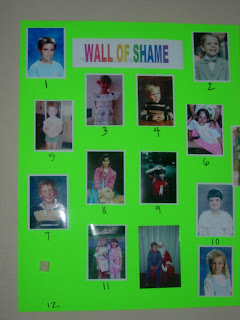 I would have given anything to have been there rather than in Utah!! I can't believe we missed all that fun!! Jamey was really going the hair for the classic 80's mullet. When we found out we couldn't go, he asked me to cut his hair.

Now that looks like fun! Love your electric blue leggins!

Micaela- I had a blast just reliving the radical evening through the slide show! You did a FABULOUS job. Um- and had i known you were taking a zoom in shot of my butt, i won't have turned around!!! :) Thanks so much! Can't wait till next year!

Love the photos, love the clothes, I would give a lot to have one of my mid-calf length sweater dresses or puff paint sweatshirts or stirrup pants available to wear. I think I have a few pairs of hideous earrings, but I don't think I'd ever cut my bangs ever again, though it would be tempting just for your party.--Jen

I came back to comment on your crisp photo of the cupcakes. I just absentmindedly stared at them for about two minutes fantasizing about licking the frosting off. Thank you for providing the opportunity.--Jen

Hello. This post is likeable, and your blog is very interesting, congratulations :-). I will add in my blogroll =). If possible gives a last there on my site, it is about the CresceNet, I hope you enjoy. The address is http://www.provedorcrescenet.com . A hug.