After a lengthy period of recent introspection, I have concluded that I must have a genetic predisposition towards 1) either going wildly over the top in everything I do, or 2) pooping out entirely. Although truth be told, I haven't a clue where I get this from. I really can't think of anyone else in my family that is like this. From whence it came, I knoweth not, but I am the most psycho extremist I know. The funny thing is that even with this brilliant insight, I haven't the foggiest what to do about it.
I'll be sitting there feverishly gluing popsicle sticks on to cute laminated elephants, wondering how and why I ever got here and vowing to never do it again. And....of course I immediately sign up to do something else equally ridiculous. Which I either complete with vigor, or cancel at the last possible moment because I realized it was insane to agree to it in the first place. WHY????

Case in point: Addy's 2nd birthday. These two pictures ought to give you a sense of place: 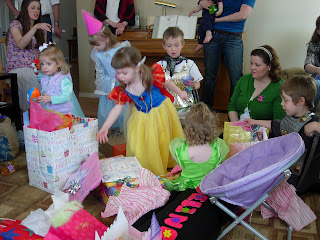 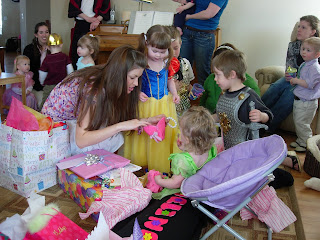 And in case you weren't sure whether or not I am a complete nutjob.....yes, that is a castle cake, and yes, we did stay up until 2am trying to get the right color frosting. And no, we did not succeed. We were going for gray and it came out kind of a puce purply bluish bruise gray. It was still cute though. 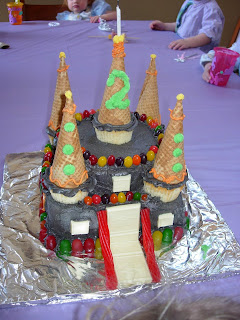 Lest you think I am alone in my neuroses, rest assured my husband and I are closely matched in this department. Exhibit A: Cardboard Castle complete with drawbridge, flag, and lookout towers. Notice Addy's crown in the 2nd pic. Classic. 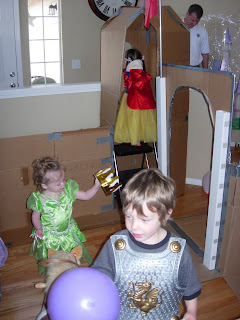 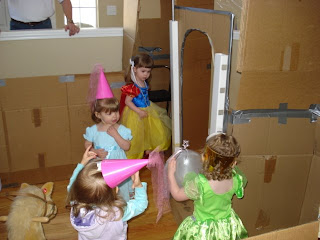 As you can see from this shot, Addy was not at her most pleasant during the festivities. Do you think it could possibly have something to do with the extreme amount of overstimulation inflicted on an unsupsecting toddler by her parents? I didn't think so either. But she and her little princess friends sure looked adorable! 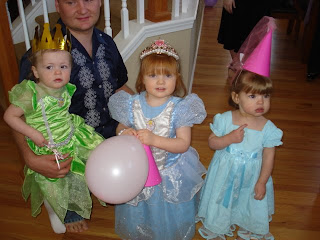 The great present opening. I don't know if you can hear it in the background, but some funny yukster (*ahem*) said something about me and babies and I all I know is that I heard the two words in one sentence and my brain froze and went into survival mode. (me plugging my ears) LALALALALALALALA.

You guys did a fantastic job. We all had a great time. And just let me say that you make someone like me, who intends to do as little as possible for her own child's 2nd b-day, look bad :-)

This is what makes you...you. Embrace the crazy within. Do you guys travel for parties? I'd love you to come and do Noah's 2nd!:)

Ok you are hilarious! I thought it was fabulous and you always have the best parties. No need to apologize for that...you go girl!
We all have things to learn from you Mrs. Partaaay Guru:)

Spencer's birthday is next week and I haven't planned a thing. Is it really possible that we came from the same parents? Help! I'm thinking I may just buy a bunch of toy guns and let all the little boys run wild for 2 hours.

HAHA- who said anything about a baby!?! :) My little princess was exhausted after such a fun party!