It's My Birthday....OK it was yesterday.

Officially, I was born 7/16/76 weighing 7lbs 6oz sometime around 11:06 or 11:07 am. In case your math is bad, this makes me 32. I had black black hair, and apparently looked Chinese, according to a random couple looking through the nursery window.

Officially, I was named "Girl Moulton", and unofficially called Kimberly by parents until I was 3 months old. At that time, my mom (and dad? I'm sketchy on the details of this decision) decided she liked the name Micaela Heather better, and unofficially wrote my "new name" on my birth certificate in pen. Officially, this became a fat pain in the arse for me when I was DROPPED OFF at the DMV on my 16th birthday for my driving test (my parents either had a misplaced amount of faith in my driving abilities or were a wee bit foolish). I managed to pass the test by a healthy margin of 2%, but was denied my license because, according to the State of Washington, I was still legally "Girl Moulton". Apparently, writing on an official court document with a Bic does not constitute a legal change.

I love that story, and since hopefully none of you know me as Girl or Kimberly, I guess we got Micaela officially documented.

Here is me at 2 months. Methinks this is not what Chinese babies look like, but what do I know? 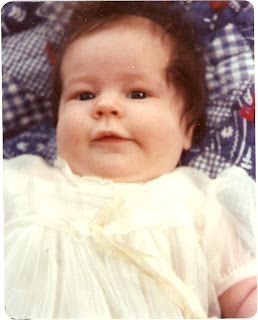 This is our little fam at my parents wedding in SLC (this is my stepdad). I'm starting to get cuter by this age, and I'm the only one in this picture that shouldn't be embarrassed by their hair. I guess Cassy's isn't THAT bad. 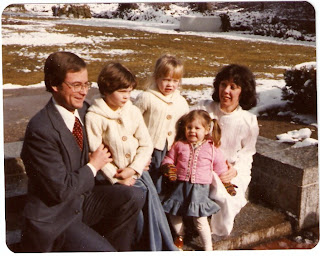 AW crap. I even have your birthday written down. Um, happy birthday? I am a wretched, wretched friend.

Happy Birthday dear! I had no idea!!! Oh, PS I don't think you look Chinese.

so... your name's origin, a DMV flashback, and wedding hair commentary are the 3 experiences you chose to recap your entire life. hahaha jk Fun glimpses back the days of yore. I love you my sister!!!