Be still your beating heart! I bloggeth!
If anything deserves a blog post, it's definitely Disneyland (although I just realized that apparently the birth of my son didn't warrant one - yikes). This last weekend, Addy and I took a mommy-daughter trip to Disneyland!! And yes, I am a mean wife and left Ammon at home with Emmett, poor man. We met up with my sister Cassy and nephew Ethan at the airport and stayed with our fabulous friend, Mandy.
Disneyland was super fun and fancy for Halloween! But note to everyone - it was pretty darn busy. I wouldn't necessarily recommend it as the best time of year to go. 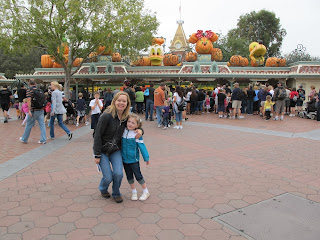 As soon as we had a chance, I let Addy pick out a pair of Mickey ears, and of course, of all the Princess paraphernalia available, these are the ones she chose... My daughter is so not a girly girl, and honestly...thank heavens. Some mom told me on the way out of the park that she paid $230 for her daughter to get a dress and her hair done (which consisted of a hairpiece that I swear had once been home to a flock of pigeons)...and she said it like it was such a bargain!
Our other California friend, Lisa, and her family joined us for Day 1 of Disney. Addy's FIRST RIDE ever at Disneyland was Autopia. She loved it. 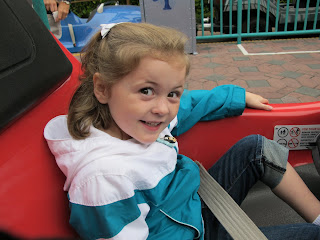 Next we hit the Matterhorn, which I was SO excited for. This pic is waiting in line, where our friend Benjamin picked a little flower for Addy. Results on her first rollercoaster: not good. There was a lot of eye covering and screams of "make it stop!!" 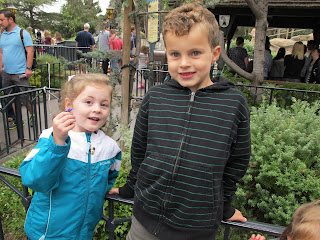 Teacups - one of my personal faves, and thankfully not scary after the Matterhorn. 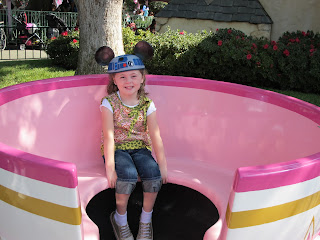 I took Addy and Lisa's daughter, Megan, on Dumbo and the Carousel while the older kids did something scary. Note - the Carousel is a motorized sedative. Be sure to bring your caffeine. After touring Sleeping Beauty's castle, Addy had her first Disneyland Churro. You must understand that this was a momentous experience (for me anyway), since I still remember my first one, also enjoyed at age 5. Note - Disneyland Churro's are NOT the same as Costco Churro's. Disneyland Churros are much, much better, and have 12 calories! 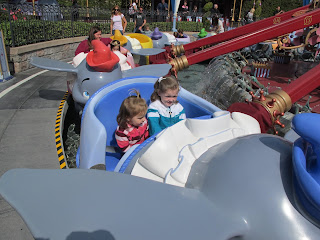 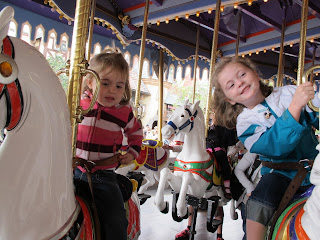 Apparently, I did not get the blaring "Addy is not ready for rollercoasters" message after her Matterhorn experience, and we went on Big Thunder Mountain Railroad anyway. I spent the 45 minutes in line (in blaring sun near some really pushy Portguese ladies) convincing her that"Fast is fun". This was our mantra as we were buckling in... "Fast is fun, Fast is Fun!", and as soon as the train started picking up speed, Addy quickly changed to "Fast is NOT FUN!!! Tell them to stop!!!!!"
Oy. That was an award winning Bad Mom moment - especially since she wisely tried to back out at the last minute and I wouldn't let her. I did not stand in that blasted line for nothing!!
I don't know if it was the speed or the noise or what, but apparently this girl is NOT ready for rollercoasters. I am seriously disappointed. I was so hoping my daughter would share my love for speed and adrenaline. Although, she is only 5. Perhaps I need to lower my expectations. 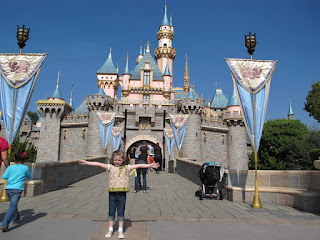 May I just insert my opinion here that Disneyland should never be attempted with less than 3 adults? Unless your idea of pure Disneyland bliss is rotating between It's a Small World and Mr. Toad's Wild Ride, you will want to participate in some kid swapping. It was SO DREAMY to experience all the magical and cute little kid things with Addy, and all the scary stuff with my nephew Ethan and the other kids. He and I went on Star Tours together, which I wisely realized Addy would NOT enjoy - it was great, but seriously nausea inducing.
Dinner at California Adventure with Ethan: 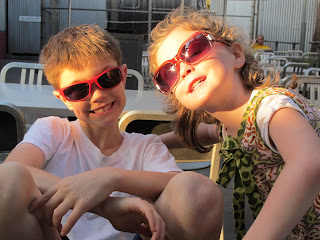 The whole front entrance of California Adventure is under construction, which means that to get anywhere, you have to walk the whole length of the park one direction, and then back again. I swear it was a mile. BUT, I got to go on California Screamin' which was AWESOME and worth any amount of walking. That rollercoaster RULES!
C.A. was closing early for a show, so we trekked the mile BACK to Disneyland to hit a few more rides before Addy's bones pooped out (as she put it).
Ethan and I did Splash Mountain while Addy went on Winnie the Pooh with Cassy. By that point, it was getting late and dark and I think her nerves were shot. She didn't enjoy it.
To avoid a little walking time at the end of the night, we decided to take the Disneyland train back around to the front entrance. Here comes Mom mistake #2 - I thoughtfully warned Addy ahead of time about the fake but slightly scary dinosaurs we would pass by on the way, and she had a GINORMOUS meltdown. Sobbing, crying, pleading, begging, etc. ANYTHING to not go on the train. THE TRAIN. You know, that really super slow "ride" that goes all the way around the park in a speedy 40+ minutes? Yes, that is what terrified her most about our day at Disneyland.
By promising to plug her ears for her the whole way (which I did), we managed to wrestle Addy onto THE TRAIN, and made it safely, and with no dinosaur attacks, back to the main gate. She conked out on the way, and my heroic sister carried her almost all the entire way back to our hotel. 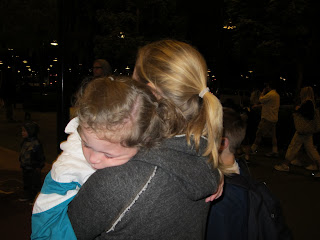 We stayed in a hotel just for that night, but it was SO WORTH it. Addy thought it was a marvel and proclaimed "This is my favorite hotel EVER!!!!" Day 1 down.

So good to see something new on your blog! I can't believe how old Addy looks (though it shouldn't surprise me--she looks just a little older than Willow, but still--kids shouldn't grow up while I'm not watching).

I so agree about the "at least 3 adults" thing. Kevin and I went to Disneyland (my first and only time) when Willow was 5 months old (also in October) and brought his parents with us so that we could go on the rides. The trip was all for us, not for her--we just had to bring her because I was still nursing.

And I agree--California Screamin' is an awesome rollercoaster!

Fun times, and not so fun ones. Thanks for sharing your moments...they're always a riot.

Ahem, did you forget some more family lives near Disneyland?! Sheesh. Just kidding. It looks like you had a blast.

We took Piper to Disneyland in June as a surprise for her 5th birthday. I convinced her to go on Space Mountain with me and she proclaimed it to be her favorite ride. Rick was a wimp and so just she and I went. Yeah for adrenaline.