It's finally official! I've had the cops called on me TWICE and my neighbors hate me. Yes, this is not a lie. I am a disturber of the peace and a public nuisance (well not officially, but it sounds more fun).

The first police incident was actually the fire department accompanied by 3 police cars. I take absolutely zero of the blame for this one - it all goes to Ammon-PyroManBoy-Crapo who thought it would be an excellent idea to light our Christmas tree on fire in the middle of the backyard on a snowy January eve. Note I said eve. Had he lit said fire at noon like he had the year before, the 25 foot flame ball wouldn't have been quite as noticeable to our loving neighbors who thoughtfully called us to be sure everything was fine, and then promptly called the fire department on us anyway.
Incident number 2, however...all me, or should I say...all the ladies of the Relief Society. OK, actually just 11 of them, but that is one rowdy group, believe you me missy.
To complete my indoctrination into the life of a suburban mom, I joined a Bunko group with a bunch of girls from church. For those of you not familiar with Bunko, it's basically a chance for women to get together and yell a lot and talk about boobs and pregnancy, with dice as an accessory.
On Friday night I hosted Bunko at my house, and as it was a nice breezy fall evening, I left all of the windows open. Which leads us to the yelling. To be clear, yelling in Bunko is not constant, but a scream let out at random intervals the likes of which you have never heard in nature, nor will again, with roughly the decibel level of a giant bullhorn going off 4 cm from your eardrum.
So. If you were my neighbor, and for 2 straight hours you heard occasional but forceful primal female screams, what conclusion would you draw? I thought so. Which is why at roughly 10pm, the cops knocked on my door for the second time in a 12 mth period. When I opened the door, laughing so hard at Mr. Officer that I was crying, I'm pretty sure he thought I was drunk. The fact that there were 10 women in the background also crying in hysterical laughter and screaming "BUT WE'RE MORMONS!!! WE'RE NOT EVEN DRINKING!!!!" did not help the situation. He looked very alarmed, but was very nice and kindly asked us to keep the sounds of domestic abuse down to a respectable level. Who said life in the suburbs was boring?
Us. Or at least our inspiration for RSGW. 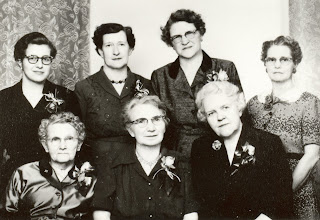 So funny! I have never played this mystical Bunko, but I have several girlfriends who play regularly. We try to keep things down around here as I have a cop two doors down and another on the street behind us. No funny stuff in this neighborhood. In fact, I got a $125 ticket this summer less than a block from our house.

okay. that is hilarious! Maybe I should have played.

Oh how I miss that Bunko group!!! Wish I could've been there to join in the laughs!